Why am I launching ALL ISRAEL NEWS? And why now? So glad you asked.
Search
April 11, 2021
Current top stories
Netanyahu has amassed huge political accomplishments, yet can't build a coalition. Joel Rosenberg explains why
vacci-nation
Lawsuit petitions Supreme Court to abolish 'discriminatory' Green Passport
vacci-nation
Pfizer demands Israel's payment for more vaccines, threatens to send Jewish state to the back of the line
Gantz to U.S. Sec. of Defense: We will work with US to ensure new Iran deal protects Israel
holocaust day
Jewish communities in the Arab Gulf region host events for Israel’s Holocaust Remembrance Day for first time
holocaust day
Reflections on the complex history of Polish-Jewish relations on the backdrop of Holocaust Remembrance Day
Direct relatives of Israelis now permitted to enter Israel – but only with proof of vaccine or COVID recovery

Israel tells ICC it does not recognize court's authority
Biden restores aid to Palestinians, endorses two-state solution
holocaust day
In an emotional speech, Israeli president addresses Holocaust survivors: 'I will forever bear your testimony in my heart'
Mike Pence signs two-book deal with Simon & Schuster – Evangelical faith, love for Israel, conservative views to play major role in the narrative
Holocaust Day
It is time for Christians, as well as Jews, to remember four of the most important heroes of the Holocaust
Holocaust Day
[VIDEO] A Holocaust survivor, Gershon Shevach, tells the story of his family's escape from the Nazis to Israel to build and rebuild
holocaust day
On Holocaust Remembrance Day, Netanyahu invokes stark reminder of imminent Iranian threat

When Prince Philip, honoring his mother, became the 1st UK royal to visit Israel
Joint List MK Cassif beaten, stepped on by police in Jerusalem - Watch
exclusive
National Religious Broadcasters announces ALL ISRAEL NEWS editor Joel Rosenberg to interview former Secretary of State Mike Pompeo at upcoming convention in Dallas
opinion
What is 'right' for Israel? Guest columnist suggests that sometimes a staunch right-wing government is neither the only nor the best path forward
Easter in the holy land
Easter Sunday in the Holy Land: Israeli, international Christians celebrate resurrection of Jesus at the Garden Tomb, Church of the Holy Sepulchre and other sites around the country
Jerusalem deputy mayor says absence of Christian tourists this year has been ‘painful’
GUEST COLUMN
Iran and Hezbollah pose a grave danger to Lebanese and Israelis – it’s time for Arab and Israeli Christians to fast & pray for liberation from these threats before a massive war erupts
PBS premiere of documentary about Evangelicals and Israel delayed following accusations by pro-Israel watchdog group
The Human Passport: Israelis counter the ‘Green Passport’ with a movement for ‘human rights and dignity’
Should Christians be concerned with Israel’s lightning-fast campaign to vaccinate 100% of its population? Some are worried
Not just holy, but happy: Israel ranked 11th happiest country worldwide
Why am I launching ALL ISRAEL NEWS? And why now? So glad you asked.

More than words: Why it matters that Netanyahu and Bennett met in English 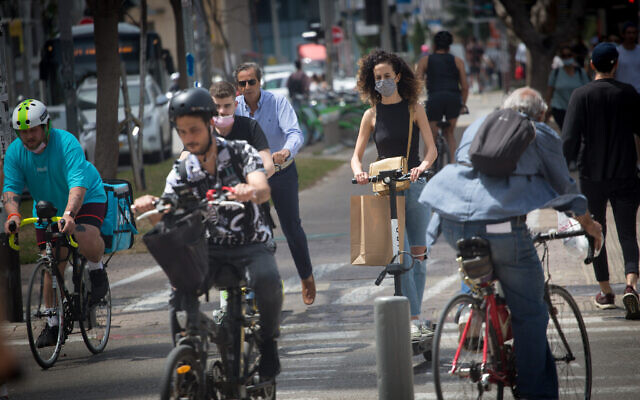 Israel may have reached a ‘sort of herd immunity’ from COVID, expert says

JERUSALEM – Welcome to ALL ISRAEL NEWS.

Whatever your nationality, background, faith, color or creed, you are welcome here.

My colleagues and I hope you will find this site intriguing -- provocative perhaps -- but always fair, insightful and helpful.

As we begin this new journey together, let me take a moment to explain why I am launching ALL ISRAEL NEWS.

It’s simple, really. The eyes of the nations are increasingly riveted on Israel and her Arab and Muslim neighbors, the Epicenter of momentous events that are shaking our world and shaping our future.

No matter where you live around the globe, we have all been deeply affected by the COVID-19 crisis and its devastating economic and social effects.

Yet no matter how immersed we become in our own personal and national problems and challenges, the people, events and spiritual importance of the Middle East always finds a way to draw – even force – our attention back here.

And that was just August.

What other major stories are heading our way?

The news coming out of Israel and the Mideast is not going away. Like it or not, the geopolitical, economic and spiritual earthquakes are going to keep on coming.

I’m 53, and in my travels around the globe, I find that the people of every faith, and of no faith, are interested in what’s happening here in the Epicenter, and particularly in this extraordinary city where I have the joy of living and working.

That said, I find that the world’s Evangelical Christians – of whom there are upwards of 600 million[1] – are especially fascinated by the biblical history and the spiritual, archaeological, geopolitical, and economic news in Israel, as well as the broader Middle East and North Africa.

This is certainly true of American Evangelicals.

According to a September 2017 survey conducted by LifeWay Research, an arm of the Southern Baptist Convention[2]:

What’s astonishing to me, however, is that there has never been a single, simple, trusted, must-read, “one-stop-shopping” website that covers all the breaking news and important spiritual and geopolitical trends affecting Israel, much less the rest of the Middle East and North Africa.

And there has certainly never been a single news site that I’ve found and trusted that provides all this in manner that speaks directly to the world’s Evangelical Christians, analyzing and interpreting events not just through geopolitical and economic lenses but also through what I call the “third lens,” that of the Bible.

ALL ISRAEL NEWS is a brand new media platform designed to provide:

People are constantly asking me, “Joel, what do you read and whom do you trust to really understand what’s going on in the Epicenter and why it matters?”

So many people all over the world are simply turned off by the mainstream media these days. Sure, there are some excellent, honest reporters out there. But there is also so much fake news and so much bias – even extreme media bias – against Christians, Jews and Muslims, and particularly against the State of Israel.

I realized that I had to make a choice: get mad or try to do more to make a difference. I’ve chosen the latter, and ALL ISRAEL NEWS is the result.

While I will continue to write books and speak here in Israel, in North America and around the world (though mostly by Zoom these days), I will serve as this website’s editor-in-chief, and as its chief correspondent and commentator.

At the same time, I’ve recruited a great team of Israeli, Palestinian and Lebanese Evangelicals to help me – reporters, editors, web designers and social media experts.

As we get started, let me give you a bit of background, for those who don’t know me.

Born in Syracuse, New York, I was raised in the Village of Fairport, a small town about 20 minutes east of Rochester, New York.

My father is Jewish. My mom is not. We became Evangelical followers of Jesus in the early 1970s, and this profoundly changed our lives.

During my undergraduate studies at Syracuse University, I had the opportunity to study for almost six months at Tel Aviv University. I arrived at the beginning of August 1987 and left toward the end of January 1988. It was my first time ever coming to Israel and traveling through the disputed territories of Judea and Samaria, more commonly known as the West Bank.

I was deeply moved by the beauty and the history of the land, but also by the people – Israeli Jews, Israeli Arabs, and Palestinian Arabs – their culture, their food, their creativity, their diversity, their zest for life, as well as their wrenching and seemingly never-ending conflict.

After graduating, I married my college sweetheart, Lynn, who was an English major and a Jewish studies minor, though she herself is not Jewish. We moved to Washington, D.C., where we began to raise a family of four sons.

From 1990 through 2000, I worked for a wide range of American and Israeli political, business and media leaders and several non-profit organizations. Among them were The Heritage Foundation and Empower America, Jack Kemp, Bill Bennett, Rush Limbaugh, Steve Forbes and Natan Sharansky.

For a few months in the fall of 2000, I also worked briefly on the “come back” campaign of then-former Israeli Prime Minister Benjamin Netanyahu. He, of course, did not “come back” to the prime minister’s office for nine more years. While I have remained in close contact with some of his staff and advisors over the past two decades, I have not seen or had a personal meeting with Netanyahu in the past 10 years.

In January 2001, I left politics – joking that I had gone through “political detox” – and began an independent writing career which has included:

During this time, I also began traveling throughout the Muslim world, beginning in Morocco and then venturing eastward to Egypt, Jordan, Turkey, Iraq, the United Arab Emirates, Saudi Arabia and Afghanistan, among other places. I interviewed Muslims, Christians and those of other faiths, hearing their stories, and trying to better understand their lives, challenges and world views.

In 2014, my wife and sons and I made aliyah – we moved from the Washington, D.C., area to Israel to become dual U.S.-Israeli citizens and establish a new life here.

In addition to mobilizing thousands of Evangelicals to come Israel for tours of the Holy Land over the years, mostly through a non-profit organization my wife and I founded called The Joshua Fund, I have also had the honor of leading six historic and headline-making delegations of American Evangelical leaders to meet with – and open up ongoing dialogues with – senior Arab Muslim leaders throughout the Middle East.

These leaders have included:

I hope this provides some perspective on why I’m launching ALL ISRAEL NEWS and its sister site, ALL ARAB NEWS, which I invite you to check out. I pray you find these sites helpful and share them with your family and friends.

Please be sure to give us your feedback in the days and weeks ahead on Facebook and Twitter – I very much look forward to hearing from you.

Thanks, and may the Lord bless you and your family as you faithfully "pray for the peace of Jerusalem," as the Psalmist commands us in Psalm 122:6.

Pfizer demands Israel's payment for more vaccines, threatens to send Jewish state to the back of the line

In an emotional speech, Israeli president addresses Holocaust survivors: 'I will forever bear your testimony in my heart'